In mid-September, some three weeks ago, I was home in Ntcheu for ziliza (unveiling tombstones for departed relations). I used the occasion to stop by Chikande Primary School, where I started my teaching career. I taught there from January 1990 to July 1993.

I entered the first classroom I taught in, which was Standard 2 at the time but is now Standard 3. It was unlocked, and I saw that it now has a cement floor. There was no cement floor in 1990, just a mud floor that the students swept daily and moistened weekly. 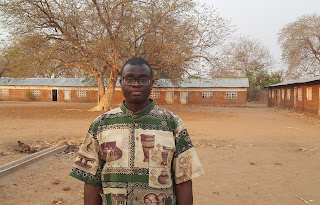 As we were waiting for the ziliza ceremony to start, a man beckoned to me to go and sit next to him. I needed to go and announce my arrival to other relations, so I motioned to him that I would see him later. He came up to me after the ceremony and wondered if I remembered him. I did not. “You taught me in Standard 3 at Chikande,” he said, and mentioned his name.

I instantly remembered him. That had been twenty-six years ago. He was now a fully grown man. The next person who came to also remind me that I taught him was unmistakable. He too was now a fully grown man but had changed very little. I even remembered his name before he could remind me. Both men went up to Standard 8 at the school, left school, and raised families. They became subsistence farmers.

At the school, save for the cement floor, and a new structure being constructed on the edge of the school forest, very little has changed in the twenty-four years since I left. But the area now has a community day secondary school. In those days the only secondary school in the entire district was Ntcheu.

Bilira had a long running distance education centre which provided an alternative secondary school opportunity to those not selected to Ntcheu, but it was not the same as being selected. There were successive years when no one was selected to a secondary school from Chikande. In lucky years, one would be selected. In luckier years, two.

When I left Chikande in 1993, I went to teach at Gunde, near Khwisa, on the Ntcheu-Balaka border. I stayed there for one term only, before leaving to go and work at the Malawi Institute of Education (MIE). From MIE I proceeded for further studies in teacher education, my current professional and academic occupation.

Most of my students at the Catholic University of Malawi, where I currently am, are student teachers who are either preparing to go into the teaching profession, or are experienced teachers upgrading from a primary teacher’s certificate to a university diploma or degree. Some are already teaching in secondary schools, but those teaching in primary school will soon leave to teach in secondary school upon completion of their studies.

The Catholic University of Malawi’s Faculty of Education offers a weekend option in addition to its residential programme. Teachers arrive on Friday evening, attend classes on Saturday and Sunday, and return to their duty stations on late Sunday afternoon or Monday morning. Some come from as far as Nsanje in the south, and others from as far as Nkhotakota. Colleagues talk about this one teacher who used to come from Chitipa.

These teachers are driven by what once drove me when I was a classroom teacher. I was driven by a desire for higher education. The prestige that comes with higher qualifications was a big factor, but an even bigger factor was the fleeting glimpse of the greater knowledge that lay out there beyond the curriculum we were working with. I see this desire in the teachers who are upgrading today.

They are hoping to escape the dead-end of what life has become for many Malawian primary school teachers. But they are also craving for deeper knowledge of curriculum, pedagogy and research so they can become better teachers. The career path in our country’s primary teacher professional development trajectory is yet to catch up with the desires of these teachers. We remain stuck in a mentality that regards primary education as deserving of only bare, minimum, basic qualifications, and not deeper academic and pedagogical knowledge offered at a university level.

Thus these teachers get their university diplomas and degrees, and the only way to recognise their new qualifications is to send them to teach in secondary schools. Primary schools are thus deprived of better qualified and educated teachers because the system operates on the premise that only secondary schools deserves such teachers. Even the National Strategy for Teacher Education and Development (NSTED), the ten-year policy plan that has guided teacher education and development in this country since 2008, and expires this year, is cognisant of this conundrum. It offers no direct solution.

Talking about policies, we are a nation that specialises in well-developed and expertly articulated plans at the national level. When it comes to implementation, you would be forgiven for concluding that the policies were developed for another planet. This has become the bane of our developmental aspirations. And we do not spend enough time analysing the root causes underlying our failure to implement our plans.

Giving a keynote address at a land governance and research conference at the University of Malawi Polytechnic in September, Professor Blessings Chinsinga shared an anecdote what made everyone in the audience wince. A Malawi government delegation is said to have visited Rwanda to learn some lessons in development from the Rwandans. This happened not too long ago.

Opening the meeting, a Rwandan minister wondered why Malawi was coming to learn from Rwanda. After all, Rwanda visited Malawi several years ago, and borrowed Malawi’s Vision 2020. The same anecdote has also been shared about Singapore, who also came to learn from Malawi some decades ago, and today they are so developed they are at par with the so-called developed countries.

We need to exert energy and expend time examining the planning-implementation discrepancy. One possible explanation is what I see as the socially constructed gap between the educated elites and the rest of the population. This is a gap resulting from restricted access to education, best illustrated through numbers of people who survive the education system and those who do not. I have discussed these numbers on this blog before, but it helps to rehash them.

Annual enrolment in Standard one has approached the one million threshold over the last eight years. However by Standard eight, only 250,000 or thereabouts survive the eight-year cycle. Of these, about 100,000 will find space in public and private secondary schools, in conventional and alternative programmes.

From a population of about 5 million learners in primary schools, our secondary school enrolment is no more than 400,000. It gets even narrower at the tertiary level, where it is less than 50,000, to use a generous estimate. To put this in perspective, this year, the four public universities took in 4,600 students.

These enrolment trends are historical. For much of the colonial and missionary era, the emphasis was on primary education only. There was no secondary school in Malawi until 1941. Even after independence in 1964, despite massive enrolments both in primary and secondary, the rate of increase was not enough to bring drastic, far-reaching changes to the social landscape.

The result is that as of 2016, only 30 percent of Malawians aged 15 and above have attained a secondary school education. the majority, 70 percent, have not. Therein lies one possible explanation for the chasm that characterises the elitism of policymaking and the absence of implementation.

Another possible explanation comes from Dan Banik and Blessings Chinsinga in their 2016 book, titled Political Transition and Inclusive Development in Malawi: The Democratic Dividend. The two professors of public policy, who co-edited the book, argue that Malawi’s institutional characteristics and requirements for development on the one hand, and democracy on the other, are pulling in opposite directions.

In other words, there is a contradiction between our development aspirations and our political practice. Again, this needs further analytical discussion, but as can be seen from how political parties behave when they are in government, political interests overshadow development interests. But these are effects, rather than causes.

What does this all have to do with the education system, you may be wondering. A lot, I argue. Particularly when we think of World Teachers Day today and its theme, Teaching in Freedom, Empowering Teachers. UNESCO have pointed out that teachers are key to achieving the 2030 Education Agenda, if not the whole SDG agenda itself. Several memes shared on social media today have carried the message that teaching is the “profession that creates all other professions.”

In Malawi, teachers are repeatedly told about how much they are valued, but that is how far it goes. A quintessential moment was when President Peter Mutharika inaugurated Chiradzulu Teachers’ College on 16th September 2015. Said the president:

We must provide teachers with necessary resources and respect them because teaching is the mother of all professions. My government wants to make sure that teachers also live a good life like Engineers, lawyers and doctors as a way of motivating them to mould our children’s future with dedication. Let us be people who raise the flag of our standards very high. We deserve the best and must aspire to be at our best. Education is where we begin the making of a nation.

That was 2015, and this is 2017. It is not the last time teachers will hear these sentiments. They have become woven into the rhetoric that forms part of the policy-implementation discrepancy. Thus our education system is ensnared in the complex maze of excellent policies that remain unimplemented.
My students and I marked World Teachers Day today with an educational visit to the Providence Industrial Mission, in Chiradzulu, some 13 kilometres from campus. 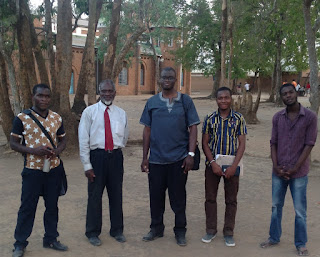 We spent the afternoon touring around PIM and learning about the educational aspirations and achievements of Reverend John Chilembwe. We sat in a classroom at the primary school and listened to a lecture by a primary school teacher, Mr George Nasolo. Mr Nasolo has extensively studied and researched John Chilembwe and the PIM.  I wrote about him in an earlier blog, in January this year.

He is one Malawian teacher who has sought to teach Malawians about John Chilembwe based on empirical evidence obtained from sources that knew Chilembwe and lived in his times. Many of these sources have since passed on, but there is a lot of material that still fascinates audiences.

Mr Nasolo is one example of many Malawian teachers who are talented and have the capacity to produce remarkable knowledge. These are teachers who have the potential to transform the knowledge landscape of this country; teachers who are pursuing intellectual freedom and empowerment in a fractured policy-implementation climate. They are driven by a craving for higher education, and deeper knowledge, for their students and communities. The same cravings that drove me nearly three decades ago.