Ascent into the Ages: Mikelle Antoine, In Memoriam

On Sunday 22nd November, Facebook reminded me of a picture I had posted six years ago, in 2009. In the picture is Mikelle Antoine, her husband, Nii, their two young children, and myself. The picture was taken on 21st November 2009, on the campus of the University of Ghana at Legon, in Accra. In the background is the Kwame Nkrumah Institute of African Studies. I had just arrived in Accra, to attend a Third World Studies annual conference in Elmina, on the shores of the Atlantic Ocean. 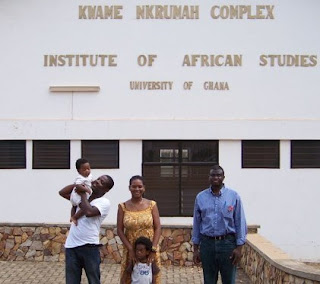 It was a nice memory. I shared it, and wrote in the comment: “Do you remember this day?” I tagged Mikelle, and hoped she would see the tag and be reminded of the memory. A thought ran through my mind. I hadn’t seen updates from Mikelle in a long time. I went to her page to see what she had been up to lately.

Somebody wished her a happy birthday, on 7th November. Beneath that comment somebody wrote: “Rest In Peace Mikelle. You were an inspiration to many and sorely missed.” That was very strange, I thought. Just because somebody hadn’t been active on their Facebook page lately, and you write on their page "rest in peace"? Below that was another birthday message; all of them posted on the 7th of November.

Another earlier message also said “Rest in Peace.” And another one. Several more. By this time my heart was pounding, and I was beginning to sweat. I started inboxing the people who had written the condolence messages, asking them what they were talking about. I got one reply within a few minutes. “Unfortunately, Mikelle died in July. She had breast cancer.” I was shattered.

I got to know Mikelle Antoine around 2003, in East Lansing, Michigan. I was a PhD student in the Department of Teacher Education, in the College of Education at Michigan State University. She was a PhD student in the History Department. One semester I took a history course in alternative modernities in African history, and that was when I got to know her. She was in the same class. Around the same time, I got to know about the Blueprints Book Club (BBC), which Leketi Makalela, then a PhD student in Linguistics also at Michigan State, and Walter Sistrunk, another PhD student, had initiated. It brought together ten or so of us, PhD students from Africa, the Caribbean and the United States, studying various aspects of Africa. Mikelle was a key member of the book club.

It was an exciting period of my life as a student. The idea behind the BBC was that there was a history of Africa that was not being taught in mainstream academia. This history, we believed, presented a form of knowledge about the Pan-African world that would have a liberating effect on African peoples. So we hungered for this knowledge. We drew up a list of books and read one book every two or so weeks. We read the work of Ivan Van Sertima, Molefe Asante, Jacob Carruthers, Cheikh Anta Diop, Marimba Ani, and others.

The recommendation to read Marimba Ani came from Mikelle, who got her first degree from Hunter College in New York where Marimba Ani was a professor of African Studies. Professor Ani taught Mikelle at Hunter. We read Marimba Ani’s 1994 book Yurugu: An Afrikan-Centered Critique of European Cultural Thought and Behaviour.

Back in the classroom, the history course I took in the History Department proved to be a turning point in my intellectual itinerary. Throughout my graduate school career, starting with the University of Iowa where I had studied English Education, there was a nagging question at the back of my mind. What was there in Africa before the coming of the Europeans? Although both my programmes at Iowa and at Michigan State were in teacher education, for the questions about Africa, I looked to other disciplines in pursuit of the nagging question.

For the term paper in the history class, I decided to give the nagging question a go. One evening I entered the MSU library around 6pm, and went to the stacks. By the time I decided to take a break, it was 6am the following day, and I had a huge pile of history books on Africa. The most fascinating discoveries were Cheikh Anta Diop's The African Origin of Civilization: Myth or Reality, Ivan Van Sertima's They Came Before Columbus: The African Presence in Ancient America, and Martin Bernal's three-volume Black Athena: The Afroasiatic Roots of Classical Civilization. They opened my eyes to what was there in Africa beyond the colonial experience.

There was a lot to learn and to unlearn. Exploring this new terrain with minds like Mikelle and others was a fascinating experience. We attended African Studies conferences. We presented papers. We talked and debated for hours. For me this meant bringing these new perspectives to the African school curriculum and the education of African teachers, which I looked forward to engaging in full time after my studies. 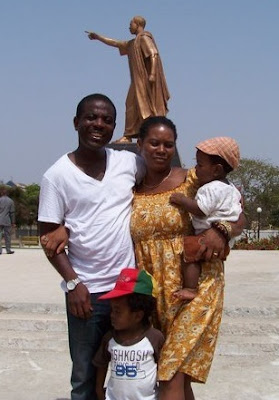 Mikelle was born and grew up in Haiti, and later came to the United States. As an undergraduate student at Hunter College she studied abroad, and it happened to be at the University of Ghana at Legon. There she met Nii, who was studying Theatre. They fell in love, and later got married. Nii joined Mikelle in Michigan, and I drove Mikelle to the airport in Detroit to welcome him.

When Nii finished his masters’ degree at Michigan State, they moved back to Accra and started raising a family. Enroute to Accra, Mikelle donated a huge chunk of her library to a South African university, where she stayed briefly for part of her research.

When I landed at Kotoka International Airport in Accra on 21st November 2009, Mikelle and Nii, and their two young children, were there to welcome me. I had told them, as I prepared for the trip, that for me this would be a pilgrimage to the capital of Pan-Africanism. Thus during my visit they took me to Kwame Nkrumah’s Memorial Park, where the great Pan-Africanist leader and philosopher rests. They also took me to the W.E.B. DuBois Memorial Centre for Pan-African Culture where the great Pan-Africanist scholar and pioneer is reposed.

Mikelle finished her PhD dissertation in 2010. She defended it on 4th June at Michigan State University, and it was titled The Rise of Asante Women within the Ahmadiyya Muslim Mission, 1960-1983. It was a study of how Asante women pursued liberation by becoming Muslim between the 1960s and the 1980s.

Mikelle was very involved intellectually, socially and communally. She was a history professor at Ashesi University, where she also taught gender, Islam, media and film, and museum education. She was director of fundraising at College for Ama, a non-profit that supported girls’ education in Accra.

She was an independent-minded and original thinker, not easily satisfied with received knowledge and accepted beliefs. I remember her one day disputing the claim that capitalism was a Western phenomenon, foreign to Africa. Disillusioned with the quality of education both in public and private schools on the continent, she strongly advocated for home-schooling. She even wrote an e-book on the topic, titled 30 Steps to Homeschooling Successfully in Africa. She was an active blogger and wrote numerous articles on homeschooling, parenting, education and other topics on her blog, Mikelle on Education.

In 2014 Mikelle and her family moved to South Carolina in the United States. In an email, she told me it was going to be for a year. On her blog she wrote about her visit to the US, and the historical research she was pursuing. She said South Carolina and North Carolina were “an extension of the West African coast… a continuation of El Mina, Cape Coast and part of the slave dungeon history.”

Ever the historian, she said the two Atlantic states answered the question “what happened to those Africans? What did they become? Did they thrive? The coasts tell one part of the story and SC/NC tell the other half.” 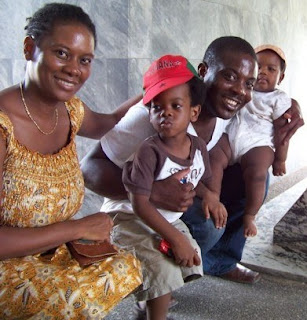 She shared a fascinating piece of living history she had stumbled upon in South Carolina: “While here, we learned what became of some of our ancestors. We recently learned about a 100 year old former share cropper woman with a second grade education. She is still living and grew up with knowledge of an African language.”

It was to be her last blog post, posted together with another one on cancerous tumours. In hindsight, that was the closest hint she ever let on that she was terminally ill. Mikelle died on 30th July this year, in South Carolina, where she was buried. She was a Pan-Africanist who lived and breathed mother Africa. She was a loving wife to Nii, a caring mother to their three children, a sweet-hearted friend and a gifted intellectual. A beautiful soul through and through. She would have turned 40 today, November 24th. She has joined the ancestors, and now belongs, to borrow an Obama phrase, to the ages.
Posted by steve sharra at Tuesday, November 24, 2015 45 comments: