Who gives who, really? Weaning out of donor dependency 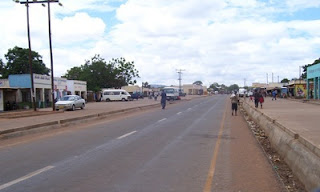 For a country that is said to rely entirely on donor money for its development budget, can today's opening of the new Ntchisi-Mponela road, said to have been financed solely from Malawian taxpayer money, be a turning point from dependency to self-sufficiency? It came quite as a surprise to me to learn that the road, which cost MK2.5 billion (approx. US$18 million), was financed by not a single penny from donor money, according to Hon. Henry Mussa, minister for public works and transport. The minister said government was able to set aside that amount of money for development projects, as a result of fiscal discipline measures that the president has introduced. In fact is at the moment enjoying very high confidence levels from the international community, if we go by recent media reports, both domestic and international media. Barely a week ago the New York Times had on its front page a story about how is ending famine by disregarding stipulations from international financial institutions.

This week opened with news that the European Union was going to give Malawi MK90 billion (upward of US$400 million) for infrastructural development, and hardly had that news settled when more news broke that Malawi had qualified for the Millennium Challenge Account, set up by United States President George Bush. The amount from the MCA was not announced, although media reports suggested that the amount ranged between US$65 and almost US$700 million. And hot on the heels of that news came yet another announcement to the effect that the Malawi Government has signed a memorandum of agreement with the United Nations, for Malawi’s progress on the Millennium Development Goals, worth US$231 million (MK33 billion), according to Nyasatimes.

Not too long ago, just before delivering his speech at the UN General Assembly meeting in September this year, President Mutharika spoke at Columbia University’s World Leaders’ Forum, following an article in the Financial Times , co-authored by Jeffrey Sachs and Glenn Denning, on how Mutharika's decision to introduce fertilizer and seed input subsidies, discouraged by the international donors, had reaped Malawi a bumper harvest of surplus maize. Mutharika spoke on the same day as Iranian President Ahmadinejad, but all the media attention was on the afternoon event at which Columbia University Lee Bollinger, in the eyes of many, waylaid and arrogantly harangued Ahmadinejad. There was no mention of President wa Mutharika’s speech earlier that morning on the same campus.

Many Malawians are thrilled about this spate of what is considered exceptionally good fortune for the country. But for those who have never been comfortable with the whole conventional paradigm that constructs countries as perpetually dependent on developed countries, these developments raise new questions rather than answers. The conventional paradigm is very well established with a hegemonic dominance that totally suppresses any notion about how much money and wealth leave Africa and other countries each year, and go to the global North. Very few people want to talk about that. But those who do, such as the Tax Justice Network, the Jubilee Debt Campaign, The New African magazine, activists and intellectuals, among others, make it clear that the amounts that are extracted out of the continent's natural and mineral resources, not to mention intellectual labor, are far more than the amounts that are given as official aid. The ideal would be a world that recognized how much interdependent on each other we have always been, at the global level, or the truth of the matter is that much of that interdependence has occurred through violence, conflict, and exploitation. I therefore mention the desire to end dependency with a caveat. Even when economists like New York University’s Professor William Easterly, who on the surface appears to appeal to leftist critical traditions in their critiques of aid, dare not mention these facts, as in his book The White Man’s Burden: Why The West’s Efforts To Aid The Rest Have Done So Much Ill And So Little Good.

A radio documentary produced from the 2007 World Social Forum held in Nairobi, Kenya, revealed that for every US$1 that goes to Africa as aid, US$10 more leave Africa and go to the West as dirty money. It was also revealed in that radio documentary, produced by Asad Ismi and Christina Swartz, and titled The Ravaging of Africa, that the mining giant Anglo American which owns the largest share of copper mining in Zambia, in 2006 posted profits of up to US$3 billion. Yet the company under-declared on its returns to the Zambian government, and ended up paying taxed for a miserly US$8 million. Elsewhere on this blog I have written about how is known to have initially borrowed US$5 billion, and by 2005, had repaid US$16 billion, and still owed US$35 billion. Conventionally trained economists and the rest of us find nothing absurd about this, accepting it as the workings of compound interest calculations in a capitalist framework. We are still unaware of how new networks of tax havens, offshoring mechanisms, and trade mispricing are all hauling huge amounts of money from Africa and other developing countries, to keep enriching the West, as has always historically been the case.

Even with the new road just inaugurated in today, the company that was awarded the contract, Mota Angil, is from . Malawian taxpayers are giving US$18 million of their hard-earned money to a developed European country. In his speech at Mponela, where he spoke for about nine minutes before proceeding to Ntchisi Boma where the main ceremony took place, the president repeated his warning to "colonialists" who exploit Malawian farmers by buying their tobacco at below market prices. He reported that on his way back from yesterday where he was attending the EU-Africa summit, he stopped over in , where he secured more markets for Malawian tobacco. The president went further, in a somewhat unrelated thread, to warn that any Westerner who holds Malawians in contempt and treats them as if they are inferior beings will be asked to leave the country.

I was preoccupied with other work matters so I was unable to proceed to Ntchisi to watch the rest of the ceremony. But I watched his speech there, and those of the Member of Parliament for the area, Hon. Nkhosa Kamwendo, and the minister for public works and transport, Hon. Henry Mussa. Hon. Kamwendo is an opposition MP, and he said he was speaking not about his concerns, but rather about the people's concerns. He said there was food crisis in Ntchisi, and requested the president to send food relief. Both Hon Mussa and President Mutharika appeared to use the opportunity to jump on Hon. Kamwendo. Mussa said he was going to contradict Kamwendo, who as an opposition MP was against the budget in the mid months of this year, a situation that raised tensions in much of the population who feared that the country would grind to a halt if the deadline for passing the budget went with no agreement. Mussa insinuated that by rejecting the budget, Kamwendo and his fellow opposition MPs were rejecting the very kind of development his own district was witnessing today. 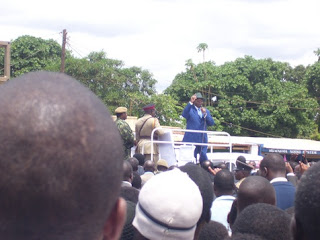 The president went even further. He repeatedly told the crowd that their MP was “lying” to them by being in the opposition and asking for government help. He extended a subtle, implicit invitation to Kamwendo, without necessarily spelling out what he meant, to come and join the government so they can work together. But the audience knew what the president meant. Where upon the eager dancing women shot to their feet and broke into a spontaneous chant: “Achoke!” “Achoke!” (He must go!). At first I was impressed that our current president, unlike previous ones, is tolerant enough to allow an opposition MP to speak at such a function. In fact I noticed one if not more dancing women in the audience dressed in MCP colors, with the late Ngwazi Dr. H. Kamuzu Banda prominently displayed on the chest. Hearing the attacks on the opposition politician, and the president’s implicit invitation for him to leave his party and join the president’s party, it made me wonder if we as a country will ever fully accept the fact that we claim to have opted for multiparty politics. Our mindset seems not to have accepted that. Or is it yet another symptom of our dependency on foreign ideas, which, as with the donor money we feel entitled to, we never critically question whether multiparty politics can indeed work for us? Does it ever really work even in those countries that purport to champion democracy, and use military force to impose it on others?

Merry Christmas from HOT USA Trends Today. Do visit, read, write about the blog if you like it.
Please subscribe to Widget Bucks if you wish to start earning online.

News that the Ntchisi-Mponela road was somely financed by Malawians proves our ability to wean ourselves out of donor dependency. Our pace may be slow and discouraging but so long as we are moving we’ll eventually get there. We want to formulate our own policies, prescribe medication for our ailing economy. Malawi will develop only if we begin to believe in ourselves. It’s not about donor money which looks like free but put us into slavely altogether.In his book, Our Continent, our future, Thandeka Mkandawire warns that” Africa should know that it cannot integrate itself fully into the global economy by permanently depending on aid…” he continue to say that aid has produced the phenomenon of dependency syndrome that stifles both imagination and initiative.
I am yet to see of a country which has sustainable development without imagination and initiative. These guys are sabotaging our economy by killing our inventiveness.

Donor support-who really gains? Should donors continue to decide what is good for us simply because they provide funding? Malawi has potential to uplift itself from poverty, we are known to have minerals, fresh water, human resources inter alia .Taking these factors into account; surely we do not need to accept dominance from donors. We are tired depending on donors where their ideologies and programmes implicitly shape our policies.
Malawi has been highly dependent on donor support for four decades. The donor funds it has received account for approximately 40 percent of the national budget. It won’t be easy to do away with them .But if we are determined, forecast and ready to sacrifice we should see light in no time.

Are you a university, college, or high school student looking to hire Best Dissertation Writers? Then fret not, because we got you sorted. We offer the best online Nursing WRiting Services for all your essay needs.