Malawianizing the Internet: Discussion forums and the harnessing of knowledge: An Interview

The interview below was conducted on October 22 with Malawian journalist Kondwani Kamiyala of The Nation newspaper, and a part of what I said was used for a feature article that Kondwani wrote on the uses that Malawians put the internet to. This was before the BBC Africa Have Your Say program of Thursday November 8, which debated criticism of Malawi on the Internet and the issue of patriotism. Kondwani's feature appeared in the Society section of the Weekend Nation of Saturday November 10, 2007, and is reproduced on Kondwani's blog. 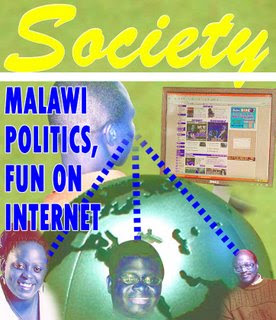 Where are you based at the moment?
Starting in 2006 I spend a number of weeks in the year in Mponela, Dowa, and the other times I'm at Michigan State University in the United States.

What is your occupation?
In Dowa I work as technical adviser for Miske Witt & Associates, Inc., on the USAID-funded Primary School Support Program: School Fees Pilot (PSSP: SFP), helping in the development and implementation of the Beginning Literacy Program in Malawi (BLP/M), aimed at improving the teaching of early literacy in early primary education in Dowa. In the United States I teach and do academic advising in Peace and Justice Studies, in the Department of Philosophy, at Michigan State University. I am also an author for Global Voices Online, an initiative of the Berkman Center for Internet and Society at Harvard University, which follows and compiles blogs from around the world, focusing mostly on countries and regions outside Western Europe and the United States..
How has Nyasanet been beneficial to you, in connecting you to Malawians at home, and those in the diaspora?
This September marks 10 years since I first subscribed to Nyasanet, which I was introduced to by Dr. Dean Makuluni whom I first met at the University of Iowa (USA) in 1997. When used carefully, Nyasanet can provide one with a rich, broad educational experience, especially in learning about Malawi and other parts of the world from the perspectives other Malawians as well as non-Malawians who participate on Nyasanet. As somebody who studies writing pedagogy, Nyasanet provides an opportunity to explore writing, debating and analytical skills, for those who follow the debates and participate in them in a serious, comprehensive way. Fellow Malawians on Nyasanet have been very helpful in providing academic as well as general information in many areas. It serves as a repository of the various skills and capacities Malawians at home and around the world possess, skills that benefit our country and our world in ways many people are not aware of. In addition, there's of course the facility of helping one connect with friends, former classmates and former workmates, and other Malawians one would otherwise not have dreamed of ever meeting.
How has Nyasanet helped you get information on Malawi at the moment?
The above response also addresses a part of this question, but let me add that there are many Malawians who possess so much information on the history of Malawi, its contemporary issues, as well as specific disciplinary knowledge on various aspects of our nation, our African and Pan-African neighbours, and the world at large. With the proliferation of websites, online newspapers and print newspapers going online, internet radios, blogs, and other news media, Nyasanet serves as a one-stop source where Malawians post things they find elsewhere on the Internet and share with other Malawians. The significance of this type of resource is under-appreciated, and Dr Llosten Kaonga, the list owner of Nyasanet, deserves to be thanked and specially honoured for having initiated the forum, and for sustaining it for over 15 years now.
How best can Malawians utilise existing resources, like Nyasanet, on the Information Superhighway to foster development in the country?
This is an excellent question. Almost every Malawian agrees that as a nation we have enormous problems, although not many understand how many of these problems originate from the historical context of Malawi and the Pan-African world in our troubled relationship with the West. One really difficult problem resulting from this history has been the question of recognizing and producing relevant knowledge for the solving of problems, small and large, and how to promote our knowledge-making capacity, and make knowledge available to as many Malawians and Africans as possible. Forums such as Nyasanet, MalawiTalk, Malawiana, etc, have a huge potential to facilitate this knowledge-making process, and make various kinds of knowledges accessible to everyone, especially those who need them most. These are the knowledges any society needs for its development, however you define development (we can discuss this as a different topic). These knowledges are available on the Internet, and they are increasing by the minute.

In Malawi we need to do two things, broadly speaking, to facilitate this knowledge-making and knowledge dissemination process. First is to search for new ways of bringing this technology to the average Malawian. One way of doing this would be to tap into opportunities that bring computers to schools, especially primary and secondary schools, and teacher training colleges. A challenge here would be how to bring computers to schools that have no electricity. But there are people who are already working on this. We need to know who they are, and find out how we can benefit from such initiatives. Mzuzu University has a degree program in Renewable Energy Technologies, which among other things trains students in solar technologies, or at least it should. This program deserves utmost attention from government, the private sector, and other forward thinking individuals. This can help us think of how to bring energy and technology to rural parts of Malawi, a development ESCOM has decidedly failed in and frighteningly let the country down. Besides schools, we should also be thinking of other knowledge and social infrastructure in the villages, such as libraries, health centres, community centres, churches, etc.

Second is to Malawianize the Internet. By this I mean to put as much relevant information as possible on the Internet, using as many Malawian languages as we can. That way any Malawians who benefit from solar technology and cheap computers in villages can easily access knowledge on how to, for example, construct a khola that multiplies the number of eggs a chicken hatches, how to teach an aspect of arithmetic to a large class of 300 pupils sitting under a tree, among other examples. In both strategies, primary and secondary school teachers have a specially significant role to play. We need to ensure that every teacher graduating from a teacher training college, from Domasi and the other university colleges knows how to use a computer, and how to access the Internet. And then we must work on making sure these teachers continue to have Internet access when they go to teach in the schools, especially the rural schools. It may sound like day dreaming, but imagination is a powerful motivator and a mover of mountains.
Do you belong to any other forums (for instance professional fora for your particular area of interest) and how do you differentiate these, if at all, with such general discussion forums as Nyasanet?
Like other people I know, I belong to no less than 30 other forums, which for me span disciplines such as the history of education, World History, African literature, African American Studies, language policy studies, the teaching of Africa, peace studies, the philosophy of history, Marxism, the study of slavery, genocide and holocaust studies, Information Technology Malawi, and many others too numerous to list here. Of course I am also on listservs that are not academic in nature. Many of the lists I am on are moderated, and you have to have an academic and research interest in the discipline to be subscribed. The content on these lists is mostly the forwarding and sharing of information relevant to people in those disciplines, with very little heated debate, expect for the Marxism list and IT Malawi list. Nyasanet is different (as is IT Malawi) in that it is not moderated in that sense, and thus the debates go in many directions. You also get your fair share of nonsense, and lots of unreflective political partisanship , which some people find time-wasting and a nuisance. But the elders were right when they said "Walira mvula walira matope", so I take this as part of any normal society. You take from Nyasanet as much as you give.
Any other comments?
I think that the above is sufficient. But I must thank you for this brilliant idea, which confirms my belief that Malawian newspapers and the Malawian media are some of the most important resources we have as a nation, and whose role at the forefront of the development agenda needs the support of us all. Please keep it up.
Posted by steve sharra at Saturday, November 17, 2007

this was great interview. Am also a Malawian football reporting blogger. check out my blog. http://dyton.blogspot.com

This is the first time that I visit here. I found so many exciting matters in this particular blog, One thing I would like to request you that pls keep posting such type of informative blog. Captain America Jacket

I appreciate this blog your blog is vert help full for me i really enjoyed this stuff dude. Spiderman Jacket

Creon is one of the most famous figures in Greek mythology. His character is known as the leader of Thebes in the myth about Oedipus. Read about him here https://best-writing-service.net/essays/literature/greek-mythology.html

This jacket is trendy and iconic. These jackets are made for men & women made with a cropped cardigan with a real leather section used in the front of the jacket. Visit Our Site. Virgin River Melinda Monroe Shearling Jacket

RightJackets is the best place for you to get the most original custom made products and more.We have the biggest range of a variety of products.

RockStar Jackets is incredibly pleased to announce ourselves as the most dependable manufacturers and exporters of a variety of products comprising of Leather Garments.

HARDCORE CYCLES was started in the Greater Philadelphia area by a group of tight friends with a passion for V-Twin performance aftermarket parts.Visit our Website Thanks

Aussie Jackets not only offers you the readymade collection but take custom bulk orders and Free Delivery. Visit My Website To Order. Thanks

I just wanted to say that I love every time visiting your wonderful post! Very powerful and have true and fresh information about psychology . Thanks for the post and effort! Please keep sharing more such a blog Best Custom Leather Jackets